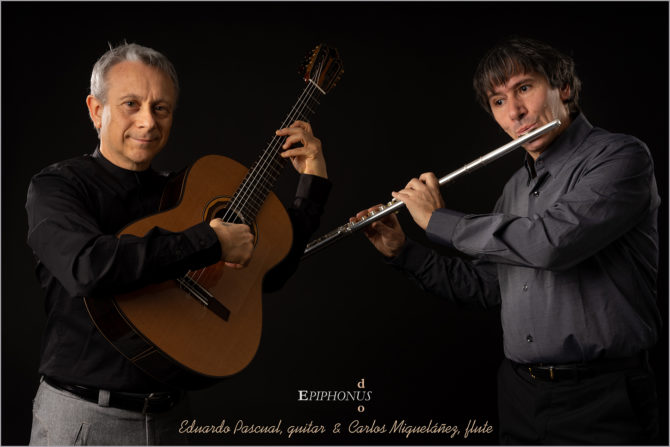 Eduardo Pascual Díez has been long settled in Valladolid where carrying out teaching at the Conservatoire of Music, since 1992. The International recognition has led him to offer toured in over 20 countries, including some of the most important concert halls and theaters in Europe, Canada, United States, Central and South America. He teaches master classes at the conservatoires and international festivals most prestigious of the world. He was born in Torrelavega, Cantabria. Graduate at the Royal Conservatoire of Music of Madrid. Pedagogical Attitude Certificate at the Complutense University of Madrid. Guitar Postgraduate in the Conservatoire of Music of Salamanca under the leadership of Jaime Catalá, specializing in the lute´s work by John Dowland. Studied D. Mus. at the Autonomous University of Madrid, dedicated to research onto the life and work of Esteban Daza. He has honed his technique with David Russell, Demetrio Ballesteros and Jose Luis Rodrigo, among others. Usually he is member jury in several international guitar competitions, among which we can highlight; Guitar Foundation of America (GFA, Montreal, Canada), JoAnn Falleta Guitar Concerto Competition (Buffalo, New York, USA), Grifyce-Trzebiatów (Poland) Rust (Austria), Xmas Guitar Contest (Lecce), Fiuggi Guitar Competition, Reggio Calabria (Italy), City of Lima (Peru), Kutná Hora (Czech Republic), Morelia International Guitar, Guitar without Frontiers, in Chihuahua … (Mexico), etc. In July 2004, made ​​a tour of concerts in Serbia and Montenegro and recorded a DVD with the ARCO String Quartet from Belgrade, within the International Music Festival of Vrnjacka Banja. He also participated in recording of 4 CD’s with the concerts offered at the International Guitar Festivals of Gubin, Poland; Ramon Roteta in Irún, Spain; Lima, Peru; and Morelia, in Mexico. Renowned composers among those who that are found, Nikolay Yordanov, Victor Hugo Ñopo Roberto Fabbri, Uros Dojcinovic, Sandro Di Stefano and Sabino De Bari, have dedicated their works to him. As of 1997, he is the artistic director of the International Festival and Guitar Competition Villa de Aranda, Burgos, and the International Guitar Festival Esteban Daza, in Valladolid, since 2010. Eduardo Pascual plays with Manuel Contreras Guitars “25th Anniversary” (1995) and Gabriel Hernández Jimenez (Paracho, Mexico), those who have especially dedicated their guitars, and has sponsored by Valenciana Strings, of the Veerkamp House, Mexico DF – and Alhambra Guitars.

Born in Valladolid, he began his musical studies at the Valladolid music conservatory, continuing them at the Amaniel Conservatory in Madrid with professors Vicente Martínez and Salvador Espasa. He completed his transverse flute studies in the conservatories of Salamanca with Professor José Miguel Trujillo and Madrid with Professor Vicente Martínez and where he obtained the higher degree.
He expands his technique by attending the advanced courses with Antonio Arias and Istvan Matuz.
As an interpreter he has developed a wide range of activities within the scope of Castilian-Leonese folklore, as well as within Sephardic or Judeo-Spanish music, participating in different formations with which he has recorded several albums and has performed concerts throughout Spain and participating in festivals and international exchanges in France, Germany, Sweden and England.
His concern for chamber music has led him to belong to numerous and varied formations and is a regular contributor to the Chamber Orchestra of San Benito in Valladolid, directed by Félix Ángel del Barrio.
At present, he works as a transverse flute teacher at the Professional Conservatory of Music of Valladolid, where he also teaches chamber music subjects and directs the junior band of the conservatory.