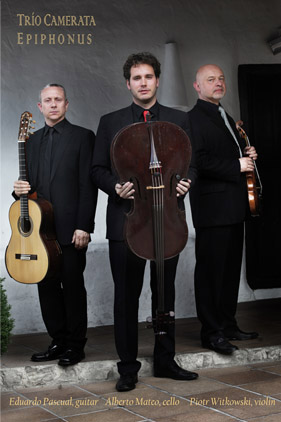 Eduardo Pascual Díez has been long settled in Valladolid where carrying out teaching at the Conservatoire of Music, since 1992. The International recognition has led him to offer toured in over 20 countries, including some of the most important concert halls and theaters in Europe, Canada, United States, Central and South America. He teaches master classes at the conservatoires and international festivals most prestigious of the world.

Eduardo Pascual Diez, born in Torrelavega, Cantabria. Graduate at the Royal Conservatoire of Music of Madrid. Pedagogical Attitude Certificate at the Complutense University of Madrid. Guitar Postgraduate in the Conservatoire of Music of Salamanca under the leadership of Jaime Catalá, specializing in the lute´s work by John Dowland. Studied D. Mus. at the Autonomous University of Madrid, dedicated to research onto the life and work of Esteban Daza. He has honed his technique with David Russell, Demetrio Ballesteros and Jose Luis Rodrigo, among others.

In July 2004, made ​​a tour of concerts in Serbia and Montenegro and recorded a DVD with the ARCO String Quartet from Belgrade, within the International Music Festival of Vrnjacka Banja. He also participated in recording of 4 CD’s with the concerts offered at the International Guitar Festivals of Gubin, Poland; Ramon Roteta in Irún, Spain; Lima, Peru; and Morelia, in Mexico.

Renowned composers among those who that are found, Nikolay Yordanov, Victor Hugo Ñopo Roberto Fabbri, Uros Dojcinovic, Sandro Di Stefano and Sabino De Bari, have dedicated their works to him.

Eduardo Pascual plays with Manuel Contreras Guitars “25th Anniversary” (1995) and Gabriel Hernández Jimenez (Paracho, Mexico), those who have especially dedicated their guitars, and has sponsored by Valenciana Strings, of the Veerkamp House, Mexico DF – and Alhambra Guitars.

Piotr Witkowski, violinist who was born in Poland, completed his musical studies at the Fryderyk Chopin Academy of Music in Warsaw with M. Lawrynowicz in 1985. At time of studies was a member of the Chamber Orchestra of Jeunesses Musicales de Pologne, which participated in some international competitions, obtaining the First Prize, Paris 1981, and the 3rd prize in Belgrade, Yugoslavia. From 1986 to 1990 he worked in the Valley Symphony Orchestra Cali in Colombia. He has been soloist in various chamber orchestras in Poland, among others, the Archi da Camara and Arcis Varsoviensis Capella, with whom he has made numerous international tours and recordings for radio and television.

Since 1992 he joined in the National Philharmonic Orchestra of Poland and alongside his orchestral activity collaborated with some of the best performer’s chamber ensembles. Currently and since 1996 he is member of the Symphony Orchestra of Castilla y León, and concertmaster of the Orchestra of León. From 1996 to 2006 he taught violin at the Conservatoire of Music in Valladolid.

Alberto Mateo Rueda, born in 1978 in Valladolid, Spain, this cello lover has been led by his musical concern to several countries of Central and Eastern Europe, where he has been able to expand knowledge and specialize in chamber music.

He has traveled throughout the Spanish geography and some European countries participating in major national and international festivals, theaters and various networks of social work, as well as many private concerts, both instrumental concert music and lyrical music with several professional choirs. He has also participated in recordings of classical music for television as well as recordings of light music.

His musical studies are complemented by a broad humanistic education focused on musical aesthetics and ethnomusicology.
Mainly engaged in the artistic genres of chamber music in Messa di Voce String Quartet with members of the OSCYL and with his friend the guitar player Eduardo Pascual, and opera in European Classical Orchestra as principal cello. He currently combines his concert activity with cello teaching and the art of lutherie.

The mama bear application is a different type of spy ware which helps in enabling the parent https://justdomyhomework.com pay for homework to know how fast their children drive their cars.